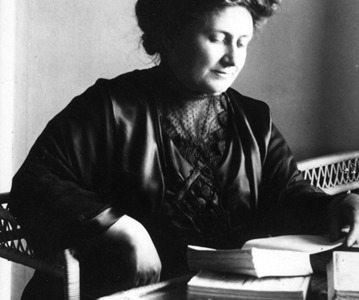 We are located in Blackhawk Plaza, Danville CA.

The Montessori Method developed by Dr. Maria Montessori, is centered upon the belief that one should provide the most positive and harmonious development of the whole child. This ultimately prepares them for a rich lifetime of learning and experience. Maria Montessori observed the learning process within children of all creeds and backgrounds from birth to maturity. She then distilled this into what is now recognized as the internationally acclaimed Montessori Method. The Montessori Method is a unique and highly successful method of teaching based on the development of the child’s innate love of learning. The Montessori philosophy recognizes the immense capacity of children to absorb information when given the freedom and independence to learn at their own pace. This approach encourages the child to enjoy the process of learning and departs completely from the discouraging ‘failure to keep up’ approach of typical teaching systems. At the same time it also gives the freedom for high achievers to progress at their own pace, without being artificially held back. The typical Montessori classroom is a very carefully prepared school environment with specific materials which both educate and refine the child’s senses while enhancing their understanding of the world around them. This environment functions by allowing the child to develop independently in all areas of learning according to his or her inner psychological and motivational needs. The learning materials are freely available for the children to learn and explore, creating a dynamic learning process guided and encouraged by the Montessori teacher. The Montessori Method understands that focusing on the individual child and allowing them to develop at their own pace translates into confidence, successful life-skills and an immense joy in learning. These life-skills continue with the child’s further education and indeed throughout their adult lives. Maria Montessori’s first school, ‘The Children’s House,’ opened in 1907 and achieved far greater success than the previous traditional state systems and many of her ideas such as cross-curriculum teaching have now been adopted into ‘mainstream education’. As the Montessori ‘Movement’ continues to thrive to this day, recent scientific and educational research has proven that Montessori students continue to outshine those in traditional schools in all areas of development research making Montessori schools an ever more popular choice. All Montessori nurseries and schools are assessed to the same Ofsted or HMI criteria as mainstream schools and generally either match or exceed those standards. Montessori education focuses on six core areas of learning: Language, practical life, mathematical, cultural, creative and sensorial and approaches these in a far broader manner than traditional state curriculums. The Montessori Method uses finely tuned activities and specially designed equipment to encourage and develop learning as opposed to a teacher simply trying to transfer their knowledge to a whole class. Montessori classrooms maintain a non-competitive environment accommodating the children’s own desire for learning as motivation. This is encouraged and directed by the Montessori teacher. The concept of self-discipline is central to Montessori philosophy. Developed throughout the Montessori Method, this leads to individuals who are independent, confident and enjoy learning in whatever environment they find themselves in. Many of Maria Montessori’s discoveries, observations and ideas are now commonly incorporated into the mainstream curriculum. However, the primary concept of individualised learning remains central within the Montessori Method. Montessori places great emphasis on social values, culture and respect for others. Cooperation and collaboration is key both to a Montessori education and also for the challenges of the modern world. Directresses/directors are especially trained to observe, to respond to the needs of each child and to direct the whole group. They do not teach in the traditional sense, but rather guide each child forward.